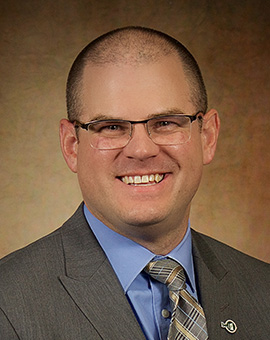 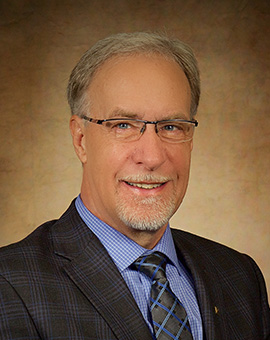 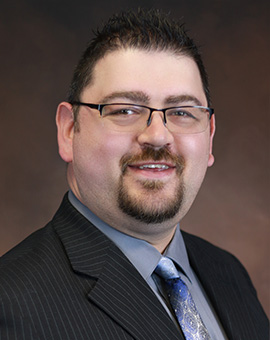 Eric joined the organization in 2013, and currently serves as Market President in Cambridge, East Bethel, and Princeton. He has been in banking for over 15 years, with most of his career in Management and Commercial Lending. Eric attended North Dakota State University and University of Sioux Falls (USF), where he played football for both universities. He graduated from USF with a degree in Business Administration with an emphasis in Finance, and graduated from the University of Wisconsin Graduate School of Banking in 2014.

In his spare time, Eric is involved in his community as a member of Cambridge Medical Center Foundation, Cambridge Business Development Corp., Jacketbacker Booster Club board, and CI Grand Slammer board, as well as assists with youth softball and basketball. He enjoys coaching, reading, and spending time with his wife Shari and their kids, Evelyn, Maraya, and Emmitt.

Clyde, Senior Vice President, joined the organization in 2002 as Credit Department Oversight Officer, a position he held for 6 years, leading to an additional 4 years as Market President.  His extensive background in banking includes 33 years of Commercial Banking Services and 5 years with Farm Credit Services.

Clyde is a long-time member of Cambridge-Isanti Rotary Club where he is Chair of the Vocational Service Committee and previously served on the board.  He is a board member of the East Central Regional Development Commission, working with the Revolving Loan Fund.  He also joined the board for Recycled Lives, a nonprofit organization with a focus on poverty in Guatemala.  In his free time, the Grantsburg, Wisconsin, native enjoys almost any outdoor activity or DIY project.  He and his wife Debbie have four children (Jason, Josh, Jenna, and Jadyn) and five grandchildren.

Allen Goldsmith joined First Bank & Trust in February 2019. After starting as a Mortgage Loan Officer, he now works in the Cambridge location as a Business Banker.

Originally from Cambridge, Minnesota, Allen completed the Credit and Finance program at St. Cloud Technical College. He has over a decade of banking experience. Active in his community, Allen is the director of the Dalbo Area Ministerial Softball League, a Cambridge-Isanti Softball Board member, a North 65 Chamber of Commerce Board member, and a Cambridge Business Development Corporation Board member.

In his free time, Allen enjoys playing softball, coaching youth softball, fantasy football, and buying and selling sports cards. He and his wife Melissa have four children. Logan, Kjirsten, Silas, and Lillian are a big help on the Goldsmith hobby farm where they tend to chickens, cows, dogs, and cats.